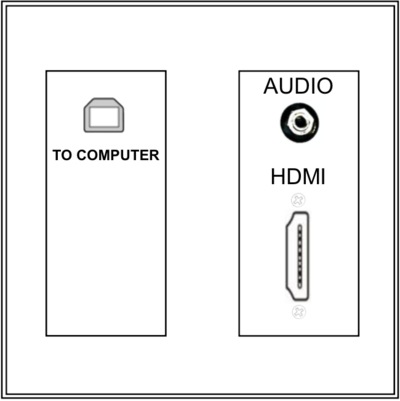 Touch pads West and East are adjacent to each entrance, and either can be used to control the both sides of the room. The touch pad will usually be dark if it has not been used for a short amount of time. Tap the touch pad and the RCS logo will appear. Touch again and you should be presented with a row of persistent icons on the left side: Video Sources, Mic Volume, Tech Tools, and Off?. On the right side is a persistent MPR Full volume slider which adjusts the overall volume level in both rooms, and displays the current time and date.

The MPR has five wireless microphones: three handhelds, one for each side, with an alternate; and two podium or table-top mics. The mics are found in the silver cart near the West entrance. Each mic has a separate control strip comprising down, up, and mute buttons with a horizontal blue individual level meter.

Note: under most conditions, the use of microphones is not warranted. If mics are used by students, please inform them of their responsibility to respect the